“The 20 most popular destinations for Americans to study abroad”

by Alexa Pipia via “Business Insider“

“Every semester, college students pack their bags and jet off to foreign countries to study abroad. The experience allows them to learn things they wouldn’t be able to learn in their college classrooms.

The Institute of International Education, a not-for-profit organization that researches the movement of international students, found that 304,467 American students studied abroad during the 2013-2014 school year — the most recent data available.

The IIE’s “Open Doors Data” is compiled with the help of the Bureau of Education and Cultural Affairs of the US Department of State. With this data, the IIE broke down the number of American studying in each country.

Business Insider used IIE’s research to find the top 20 countries and then researched the basics of what they need to know before moving there: official language, currency, and exchange rate (as of early August). We then looked to Lonely Planet for the cost of a typical low-budget meal, since studying abroad can get costly.

Europe is the continent of choice, with eight countries featured on the list. South America is in second place with five countries.

Read on to find out the 20 most popular countries where American students study abroad.”

“11 Exotic Destinations Even A Broke Student Can Afford To Visit”

When we think of exotic destinations, it’s easy to think of luxury, expensive hotels/resorts and that sort of deal, but it really doesn’t have to be that way. This list of affordable exotic destinations should provide you with a good idea of where you can go when you’re tired of the same ol’ same ol’.

If you want to get the most value for your money, make sure you stay out of/spend little time in Bangkok. While the bustling capital is a thing worth experiencing in and of itself, accommodation and food is much cheaper in other places in Thailand, and there are a lot more interesting things to see. For example, the featured image is from Khao Phing Kan, also known as James Bond’s island. Also, many places in Thailand allow you to get up close and personal with Tigers, so if that’s on your bucket list, Thailand is just the place for crossing it off.

(Picture credit: Arian Zwegers) You might be surprised to learn that Indonesia is the 4th most populated Country in the world, with almost 240 million people inhabitants. This fact, combined with the many small islands that make up the country, makes it a completely different scenery from what most of us are used to. With options like admiring huge active volcanoes from afar, visit what was recently a completely isolated people in Baliem Valley, experience bustling trade districts, the traditional dance performance of Legong(picture), or relax on the beac, it’s hard to go wrong.

(Picture credit:  Hadi Zaher) At this point you’re probably not surprised that Malaysia made the list. Kuala Lumpur is the most popular destination, and with some cuts, like not staying in a premier hotel, it’s possible to do a longer stay on a budget. The picture is from Batu Caves, a series of caves and cave temples located just north of the capital. Again the options are many, and you can choose to have a very multi-faceted trip if you want to. One thing you should keep in mind is that Malaysia has a primarily Muslim population, so making an effort to not offend them by the way you dress will keep you out of trouble, and might even earn you that little extra bit of good-will you need to have an amazing experience.

(Picture credit: Shankar S.) While perhaps being most famous for cheap labor, the Philippines is a great destination for backpackers and budget travelers in general. Not only is it a haven for budget divers and beach people in general, you can also go to see the stunning Banaue Rice Terraces, or the monstrous Mayon volcano, or you could even take a trip through the Puerto Princesa underground river, one of the new 7 wonders of nature. With some suggested daily budgets going as low as 15-20$ per day and even lower, it’s a no-brainer for the sun deprived, broke student.

(Photo credit: Visionn Photo) Although it’s probably not the first country that comes to mind when you hear “exotic,” Albania has some of the cheapest costs of living of all the countries in Europe. And its safety, culture, and the many beautiful beaches, for example Ksamil Beach in the picture above, makes it an ideal location for someone who wants maximum return on their dollar. . . . .

“Travel Cheap And Travel Young: 10 Countries You Can Visit On A College Budget”

by Clay Winoweicki via “Elite Daily”

With the travel season upon us, it’s time to begin exploring again and creating memories that last.

Like everyone else, I’m pretty much broke and can’t afford to go on a luxury trip across Europe, but just because the university takes all my cash doesn’t mean I can’t still travel.

Here is a list of 10 countries that rank on the low-end for cost right now:

Home to many activities and sites, this cheap country will have you living like a king for less than you would think. You can get a nice place to stay, food, transportation and even alcohol for less than 20 USD per day.

Thailand has been trying to revamp its tourism as of late and many tourism companies have been offering excellent deals. I’m a huge advocate of hostels, but if that isn’t your thing, you can get a private room with a bathroom for less than 30 USD per night.

If you are open to bunks, you can easily get by for an entire day on that price.

With the state of the economic condition in Greece, prices are low and the tourism will help bring in some more much-needed money. The country is mind-numbingly beautiful and features amazing coasts and architecture.

This is one of the best locations in all of Europe for cheap travel. . . . .

The 15-mile Fimmvörðuháls trail takes you from the coastal greenfields of Skógar, past waterfalls, mountain goats and the famous the Eyjafjallajökull volcano, which erupted in 2010. It can be a tough slog in a day, especially in the snow, which can stick around until late June despite warm weather. A great place to break your journey to Thórsmörk is the Baldursskali volcano hut. It’s in an isolated spot, so most days you’ll only see couple of wardens, their dog an half a dozen walkers. If tackling nearby Laugavegurinn trail, book overnight huts through the Icelandic Touring Association.
Dorm from £34, advance booking advised, volcanohuts.com
Brightey

The gite d-etape “L’Alivi” is in the tiny village of Serriera on the fantastic six-dayMare e Monti (Nord) trail in Corsica. You’ll find a good bed in a rustic stone building that was once the village’s olive press and mill, and the food here was some of the best we had in Corsica. We ate herb tart, wild-boar lasagne and a local cheese, served with homemade fig preserve. Breakfasts are no less generous and there are packed lunches (€7), too.
Dorm from €18, doubles/private dorm also available, alivi.fr
bryfox

“We prefer the traditional ways”, said the refuge manager. “Anyway, it’s cheaper. We can’t afford helicopter supplies!” We were staying in the Astrakas refuge, nearly 2,000 metres high (and powered by solar panels), in the mountains of northern Greece. It is open from May to October, serves food and has simple dorms and cold showers. Enjoy the peaks and tarns of Mount Gamila and take the well-marked paths to the Dragon Lake, or to the Vikos gorge and cobbled tracks of the Zagoria. Bed from €13, astrakarefuge.com
JaneSLaurie

In between crystal-clear lakes and encircled by the jagged peaks of the Tatra mountains is the Polish Tourist Society mountain shelter. This is the only lodge inthe national park that can’t be reached by car and makes the perfect spot to break your trek. Refuel with a bowl of zurek, a hearty soup of sausage, onion and potatoes, before taking an evening stroll to see the wildflowers or the Siklawa waterfall.
Dorm from £7 a night, piecstawow.pl
Rachel Thorley  . . . .

“Ljubljana travel tips: Where to go and what to see in 48 hours”

by Mary Novakovich via “Independent”

brings everyone out into the Baroque streets and riverside cafés of Slovenia’s jewel-like capital. It’s like walking into the most civilised street party in Europe, with the bonus of exquisite architecture and top-notch cuisine.

Until 28 September, the Ljubljana Summer Festival (ljubljanafestival.si) runs a varied programme of classical concerts, opera, ballet and theatre in venues around the city. On a different note, there’s techno, blues, retro pop and club nights during the Gala Hala Summer Stage festival at the Metelkova Mesto (1) alternative culture centre (metelkovamesto.org) until 31 July. And on 28 August, the Biennial of Graphic Arts kicks off, with three months of projects, exhibitions and events across the city (mglc-lj.si).

Looking further ahead, the city will be Europe’s Green Capital 2016, taking up the mantle from Bristol (ljubljana.si/en/green-capital).

The shuttle bus from the airport to the bus station (2) costs €4.10, runs hourly and takes 50 minutes. Shared transfers can be booked with companies such as GoOpi (goopti.com) for about €9pp. Taxis cost between €40 and €45.

The Ljubljanica river curves through the city, with the pedestrianised Old Town on its eastern bank dominated by the medieval Ljubljana Castle (3).

On the western bank of the river is the cultural centre of the city, with the university (4), the Philharmonic Hall (5), one of Europe’s oldest, and the main square, Presernov Trg (6). The main tourist office (7) is by the Triple Bridge at Adamic-Lundrovo nabrezje 2 (00 386 1 306 1215; visitljubljana.com; open daily June to September, 8am to 9pm, to 7pm, October to May). Here, you can buy the Ljubljana Card, which gives free entry to museums, public transport and bike hire, plus various discounts. From €20.70 for 24 hours.

A few steps away from the river at Krojacka 6 is the chic Vander Urbani Resort (8) (00 386 1 200 9000; vanderhotel.com) run by a friendly Australian- Slovenian couple. Along with stylish rooms is a rare sight in Ljubljana: a rooftop plunge pool. Doubles from €109, B&B.

by Team Fathom via “Fathom“ 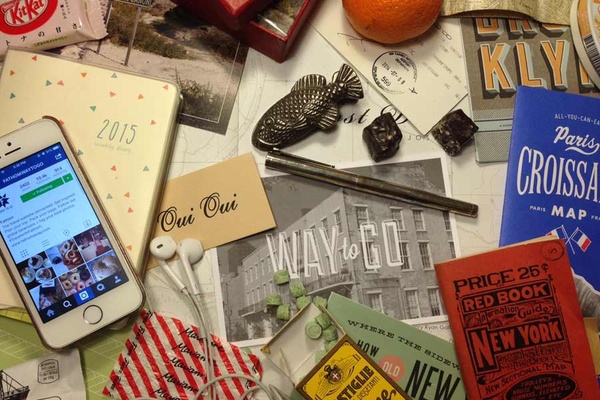 When we compiled our original 24 Best Travel Blogs and Websites, we thought we were creating an index that would be useful for readers and for ourselves. Little did we know it would become the most popular feature we’ve ever published.

Three years later, the web has evolved and new talent has emerged. After considering hundreds of sites (the internet: it likes to travel), we’re proud to announce the 24 Best Travel Blogs and Websites of 2015.

This year, we’re honing in on personal journeys and very specific lenses people use when traveling. You’ll find a blog that distills the world into 12-hour itineraries, a website that catalogs the world’s best reading nooks, an online compendium of weekend jaunts from NYC, and a guide to traveling in search of the best oysters. Happy exploring.  . . .