School in the Middle East

“UK Is the Most Searched for Study Abroad Destination for Americans”

by Akane Otani via “SKIFT“

Spending a semester in a foreign country is usually billed as a way for college kids to acquire experience with different cultures and environments, but U.S. students studying abroad seem drawn to places where most people speak their language.

London, Oxford, and Cambridge are the most searched-for cities by U.S. students who hope to study overseas, according to a report published Wednesday by Google.

Google analyzed its data to find the volume of U.S. queries for a list of global cities that included search terms “relating to higher education.” After London, Oxford, and Cambridge, U.S. students searched the most for Edinburgh, Melbourne, Seoul, Sydney, and Dublin. Nine of the top 20 cities were in the U.K. Just three of the top 20—Hong Kong, Singapore, and Shanghai—were Asian cities.

London, Oxford, and Cambridge are the three most searched- for cities in the world among U.S. students looking to study abroad. Melbourne, Australia; Seoul, Korea; and Sydney, Australia also ranked highly.

Even when Google rearranged its rankings to exclude searches for specific university names, London was the most searched-for city, followed by Paris, Barcelona, Berlin, and Singapore. “No matter how we looked at it, by university brand or just generic keywords, there is no doubt that London and the United Kingdom are the biggest magnets for U.S. students looking to study abroad,” said Harry Walker, education industry head at Google.

Why London? Beloved accents and academic powerhouses aside, London is a hub of business and finance—the most searched-for subject among U.S. students looking to study in the city, Google says. Students might also be drawn to the city’s eminence in fashion, medicine, and art, Google’s data suggests. Bonus: It doesn’t hurt that there’s no language barrier to grapple with.

“Study Abroad as a Language Requirement”

by Jacqueline Boyle via “Student Life“

“Thousands of students each year choose to study abroad, with various motivations, but I wager if you were to ask language majors why they go abroad, the overwhelming majority would say, “I want to be able to speak the language.” It is a valid reason and a category I fell into before my time down in South America. The real importance, though, is the results: results that speak to the necessity of requiring all language majors to have spent time immersed in the culture and the language they wish to pursue.

What’s Your Opinion? Should traveling to a country that speaks your language be a requirement for language majors?

For those of you who have already traveled abroad before:

While the most important word ever is “I’m Sorry” (Miahne), a lot of people already know that one. What they don’t mention is “Yok” (long o).  That’s “subway station”  in Korean and is used for everything in regards to directions.  Even the locals give directions in terms of which exit of the subway you should orient yourself to.  Lots of times you’ll be dropped off by taxis at the closest Yok to your destination.  It’s the one word you definitely need to know if you’re going to be in Korea, even for a day. But it’s rarely on the ‘most translated words’ lists.

Celebrations abound! At last, “Traveler’s Lodestone” is officially out in hard copy — a great universal translator ready for use! 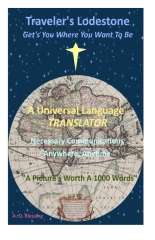 After a great deal of time and effort, we have put together this great resource for anyone working with foreign languages. Whether that be while traveling abroad or when dealing with non-native speakers in your own backyard.  “Traveler’s Lodestone”  is a point-to-speak book. It uses picture-based communications to cover the basic things a person would need when conversing in any foreign language. The idea is that when the words aren’t at the tip of your tongue, the pictures are at the tip of your finger. Everything from groceries to clothes to hotel amenities to weather, directions, and more is available instantly with this easy to use book. It’s quick and universal!

Right now it’s out on CreateSpace, but coming soon to Amazon and other booksellers near you. At 5×8 and 100 pages, it’s small enough to stick in your purse or bag and carry around, easy to pull out and use. Check out this great universal translator! Now tested in Korea, Japan, and China–it worked perfectly! (the Bathroom/Toilet pic is apparently very popular 😛 )  Trust me; I’ve tried the dictionaries, translation books, etc. and this is the best tool I’ve found so far.

Pick up Your Paperback Copy By Clicking Here

If you are interested in the E-book Version, that’s available here.  The e-book is actually broken up into 3 short Volumes for easier use.

We’re also working on a Android/Apple app. As soon as I figure out how to attach buttons to links, we’ll be adding that.

As most of you know, your average college student can’t survive without good old government school loans, and that means the dreaded FAFSA.  That horrid form you have to fill out every year just to prove what you already know, you’re broke. 😛

For those of you studying abroad, you probably are aware that you can get federal loans to cover these classes if your school transfers them in or is in charge of the program.  Usually, this means you have to study via a US college’s program, either through your own university or as a visiting student at another college.  I have studied abroad several times, but only once through my own college.  All my law school classes abroad have been through programs offered by other US law schools who agreed to take me in.

But did you know that the FAFSA doesn’t just cover US schools?  Sometimes, your college is unwilling to transfer in credits.  Or you want to take more classes than is allowed for transfer purposes.  Or a program just isn’t offered through a US school in that country or area you wanted for that specialization you’ve been dying to research.

For those situations, you might want to turn to the FAFSA School Code List available here.  You probably haven’t looked at this since your first semester when you had them send the forms to your college, but try taking a look at the bottom of the list.  That’s right, the FAFSA program may cover a program you’re interested in at a foreign school.  The list starts on page 147 of the form, and it includes numerous school in all sorts of countries.  So if you’ve always been interested in studying in Australia, but no US college offers a program at that university/city, check out this list.  If it’s on the list, it is covered by FAFSA and you can apply for US government school loans to cover that program of study the same as you would any US program.  This is how many US students are affording to get their entire degrees abroad. Technically, you can have an entire undergraduate or graduate degree covered with school loans in these schools via the FAFSA program, the same as if you studied in the US. Or even just a summer program.  It’s worth looking into!  Also remember, if it isn’t on this list then FAFSA won’t cover it.  So unless it’s on this list or you’re traveling there via a US college, you may  have to pay out-of-pocket.