by Le Phuong via “Xinua News“

HO CHI MINH CITY, Aug. 28 (Xinhua) – While most Vietnamese high school students are busy preparing for the country’s tough college entrance examinations, quite a few of their classmates are also in the thick of preparations for their coming trips abroad to study in foreign colleges.

Just a couple of weeks ahead of the new academic school year starting September, 18-year-old Lan Anh, who just graduated from a famous high school in capital Hanoi, has already packed her luggage and attended farewell parties with relatives and friends before her coming trip to the United States to pursue her college studies.

“Going abroad to study was my dream since I was in the primary grades and I have strived hard to realize my dream. Of course, without the financial support of my family, I would not be able to do that,” Anh told Xinhua recently .

Anh said that with a diploma from an American college, she would find it easy to get a good job in Vietnam or in the United States if she would be allowed to stay there after graduation.

Nguyen Quoc Hung, a native in Hoai Duc District here, chose to take medicine in a college in China for his post-graduate study.

“Members of three generations in my family have practiced traditional medicine. My father is now running a clinic selling herbal medicines and treating patients with physical therapy such as acupuncture. I want to follow his footsteps,” Hung said.

He said he decided to study at a medical college in China because as far as he knows China is where Oriental medicine has been practiced since ancient times– the cradle of traditional medicine.

In recent years, the number of Vietnamese high school graduates going abroad for college has been on the rise.

Statistics from the Vietnam’s Ministry of Education and Training (MoET) showed that as of the end of 2013, there were more than 115,000 Vietnamese students studying in 47 countries and territories, a ten-fold increase from the previous ten years. Among them, 90 percent have paid for their own foreign studies.

According to Nguyen Xuan Vang, Head of MoET’s Overseas Training Department, in recent years, Vietnam’s education sector has expanded its relations with foreign counterparts. The sector has also adopted measures that encourage students to study abroad, which is in line with the policies of the Communist Party and the state to promote global integration, the MoET said.

Every year, thousands of students go abroad for study using their own money and many of them, when they returned home, have contributed greatly to the country’s socio-economic development.

Every year, the MoET grants scholarships for deserving Vietnamese high school graduates to study abroad under strict selection process, including the grantees’ pledge to return home to serve the country after their education abroad.

Le Hong Ly, Director of the Tri Thuc (Knowledge) Center for Consultancy of Overseas Study, told Xinhua that over the past five years the number of her clients has risen.

“With improved living conditions, many well-off families in Vietnam are ready to invest in their children’s overseas education with the hope that they would acquire better education from advanced countries and would have a brighter future,” Le Hong Ly said. . . . .

One of our Professors in Japan

If you are interested in Studying Abroad or if you have Studied Abroad in the past, now might be a good time to look at how it can help expand your Résumé.

One of the simplest ways that you can use your Study Abroad experience in your Résumé is simply by listing it as part of your education.  There are multiple ways you can benefit from this.  First, if you are new to the career field, then your Résumé might be running a little thin on information; use the “Studying Abroad” experience as a filler/lengthener.  Sounds silly/cheap, but everything counts in the job search.  More importantly, if you list the foreign college that you studied under, it adds to the depth of your educational experience. It shows that you have studied under Professors coming from different backgrounds or ways of thought.  It adds to the fact that you might bring in unique or different ideas to their work. For example, I have studied the Law in Civil Law nations and Common Law nations. That means that simply by stating that I studied in China and the United States, my interviewers can tell that I understand ways different people view the law and how it can be applied in alternative ways.   It strengthens the fact that I stand out from the rest of their applicants.

One of the things you are going to need on both your Résumé and your Cover Letter are key terms, skills, and/or character traits.  You will frequently be asked to name your strengths, weaknesses, and abilities.  Or perhaps you just need to show them what you can offer their team.  If you Study Abroad, there are many helpful terms that can now be applied to you.  Some of those you might use include: END_OF_DOCUMENT_TOKEN_TO_BE_REPLACED

“Tips for Using Your Cellphone Abroad”

by Kari Bodnarchuk via “The Globe Correspondent“

“Keeping connected by cellphone while outside the United States can be one of travel’s most maddening experiences, and can quickly — and often unknowingly — blow your budget. Plan ahead and you can save a bundle and still stay (or be) in touch. Consider the following tips as you plan your foreign travels.

For most US cellphone carriers, plans can be pricey. Find out what type of calling and data plan you can get through your local carrier, and what it covers at your destination. If you’re a T-Mobile customer, check out the company’s new rate plan, Simple Choice, which offers unlimited data and text messaging in more than 120 countries, and incoming or outgoing calls at 20 cents per minute while outside the country. Data transfers at 2G speeds internationally, but you can pay extra for increased speed.

Buying a local SIM card at your destination can be one of the most affordable ways to stay connected. But to use a foreign SIM card, you need to make sure your phone is unlocked and compatible. Some carriers will unlock your phone within a month of purchasing it; others make you satisfy a long-term contract first. Also make sure your phone works on the right cell frequency band for your destination, or has dual-band capability. Carriers such as AT&T and T-Mobile, for instance, operate on GSM technology, whereas Verizon uses CDMA.

“Most of the rest of the world (with the notable exception of Japan) operates on GSM technology, so if you are traveling internationally, you must have a GSM-capable phone or it won’t work with local SIM cards,” says Barbara Weibel, a globetrotter currently traveling in Thailand.

After landing at your destination, buy a prepaid SIM card, often for just a few dollars, and add credit. You will generally pay less if you purchase a card outside the airport. To avoid frustration (it’s not always a smooth and glitch-free process), go to a local cellphone office or department store and find a knowledgeable salesperson who can help with setup, and who may let you return the SIM card on the spot if it doesn’t work. Once you’re up and running, cards can typically be topped up at a phone store, service station, newsstand, post office, or other local spot, or by calling a toll-free number. . . . .” 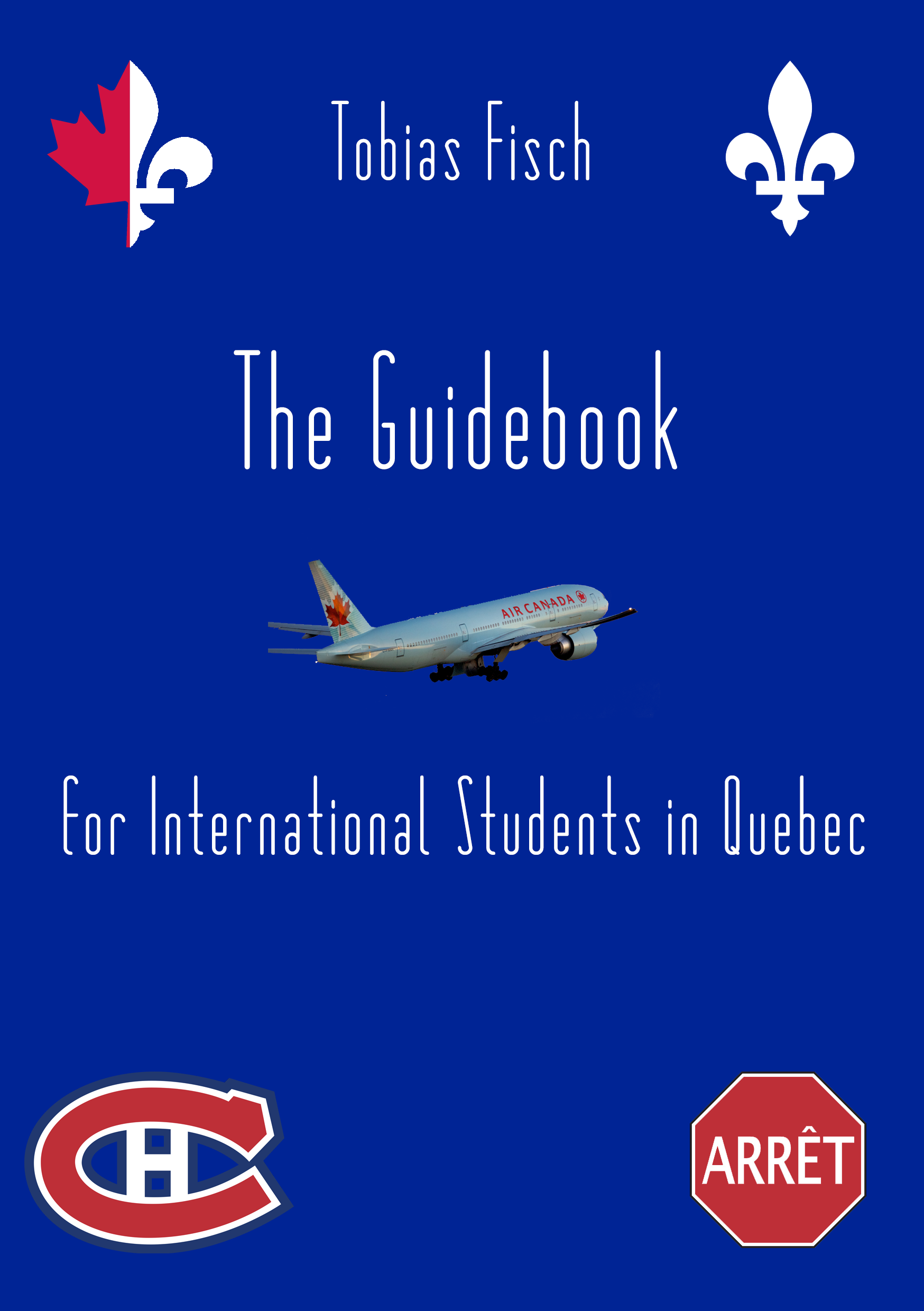 I don’t know if I can really call this a book review, when it’s only a five page pdf, but what the hey! 🙂  Author Tobias Fisch has graciously put together a handy little online booklet for students interested in studying in Québec/Canada.

To start with, a disclaimer: I get the feeling that the author is talking about studying in High School, because he/she discusses the opportunity to participate in Prom, Graduation, and the “big exams.”  Still, I didn’t think that really detracted from the guidebook–only a short part (the section on how classes work) was relevant to what level of education you’re in.  And if you are in  high school, it’s all good–especially the part about the 10-day schedule!

The rest of it went over generally helpful information for all students studying abroad (how to adjust to a host family, how to avoid homesickness) and then very specific information about Québec itself starting on page 3.

Some of the things you might want to check out are the slang words used in Québecan French, how the money works, the standard tax rate (calculate it into your prices!), how to arrange phone communication, and the Unit changes.  Actually pretty much all of the information from pages 3-5 are helpful.  So if you are interested in studying in Canada, you might check it out!

“The Guidebook for International Students in Québec”