Here are the 100 best things to do in Germany that will show you the charm, beauty and cultural diversity of this country.

Germany is rich with surprises and contrasts just waiting to be discovered by the discerning tourist. A country of enchanting little villages nestling between lofty and imposing mountains, fairytale castles and churches and lush vineyards rolling down towards the banks of the Rhine or the Mosel, Germany also boasts of the more rumbustious Munich Beer Festival and the Cologne Carnival, a very fine choice of gateaux, sausages and beer and a powerful and somewhat spooky folkloric tradition.

Located in the Garmisch-Partenkirchen region of Upper Bavaria, the Zugspitze can be accessed by cable car from the Eibsee lake (around ten minutes) or by cogwheel train from Greinau followed by a cable car from the Zugspitzplatt to the summit. There are also five hiking routes for the more intrepid and guided tours with overnight stops are a popular tourist attraction for avid hikers.

At 2.962 metres above sea level, the Zugspitze is not only the highest mountain peak in the Wetterstein mountains, it is the highest peak in Germany. On a clear day, the breathtakingly lovely panorama of the mountain ranges of four neighboring countries – Germany, Austria, Italy and Switzerland – is clearly visible from its summit. For those who love hiking and/or winter sports, the Zugspitze is definitely a number 1 choice when visiting Germany!

2. The Castle of Neuschwanstein (Munich) 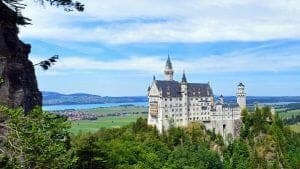 In 1868, four years after acceding to the throne, the shy and reclusive King Ludwig II commissioned his architects Eduard Riedel and Georg von Dollmann to build him a mediaeval castle where he could hide from his people. Paradoxically, Ludwig himself only lived a few months in the castle before his death in 1886; 7 weeks later the castle was opened to the public and it has been one of Germany’s most popular tourist attractions ever since.

Located in Hohenschwangau in the rolling green hills of southern Bavaria, surrounded by blue lakes, Neuschwanstein appears to float in the clouds like some magical castle in a fairytale. From Munich, it can easily be visited as a day trip. Tickets should be booked in advance!

North of Freiburg in Baden-Württemberg in the little village of Rust is the biggest amusement park in the whole of the German-speaking world. In 2015 alone, it boasted 5,5 million visitors and is among the top 5 tourist attractions in Germany worldwide. In 2016, it won the “Golden Ticket Award” as the best amusement park in the world for the third year running. As an additional bonus, it is also open in winter!

With more shows, rides and attractions than one could ever imagine, including the biggest roller coaster in Europe, the Europa Park offers unlimited fun, excitement and entertainment to young and old alike. The Europa Parkc can be accessed from Freiburg by car in around 30 minutes and the closest railway station is Freiburg. Additionally there are a number of airports close by which offer shuttle-bus transport directly to the Europa Park. 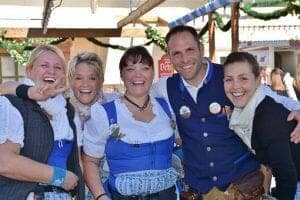 Munich`s flamboyant Oktoberfest is famous the whole world over. Since its inception in 1810 in celebration of the wedding between Ludwig of Bavaria and his bride Therese von Sachsen-Hildburghausen, the Oktoberfest has grown continuously in size and popularity. With its dirndls and its lederhosen, its stalls and diners offering a multitude of German and Bavarian specialties and – of course – its fourteen beer tents offering beer for every taste (and wine, too!), the Oktoberfest is a must for anyone seeking the fun side of Germany.

The Oktoberfest takes place once a year, beginning in September and ending in October, on the famous “Theresienwiese”, otherwise known as “Festwiese”. Travel by public transport from München is recommended owing to lack of parking. 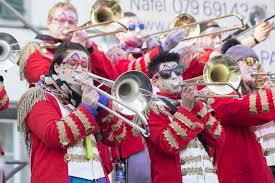 Traditionally, Cologne carnival begins whimsically at the 11th hour on the 11th day of the 11th month, although the serious partying does not begin until Shrove Thursday. However, when it does, it goes with a bang! Cologne carnival is a celebration, above all, of fancy dress: streets, pubs and restaurants are full of exotic and bizarre costumes, streamers, balloons, practical jokes and laughter. The highlight is a 6 kilometre-long parade through the streets of Cologne on shrove Monday. A colorful, unforgettable, once-in-a-lifetime experience!

Though Cologne carnival is predominantly a street festival, there are plenty of carnival dances, dinners, parties and other indoor events running at the same time to choose from. Street activity during carnival time is at its height in the city center and the old parts of the city, which are accessible by bus or train from Cologne airport within 20 to 25 minutes. 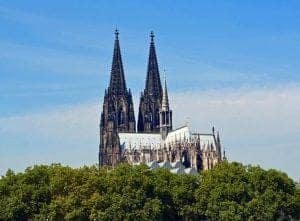 At the time of its completion in 1880, Cologne Cathedral, with its awe-inspiring twin spires, was the highest building in the world. Even now, at 157m, it dominates the surrounding architecture with ease. Building commenced in 1248 but was halted during the Middle Ages and recommenced in the 19th century. Cologne cathedral reputedly houses the remains of the Three Biblical Magi- which were given to the Archbishop of Cologne by the Holy Roman Emperor Frederick Barbarossa in 1164 – and is an important destination for modern-day pilgrims to this day. For this reason, but also because of its being “an exceptional work of human creative genius”, Cologne Cathedral was dubbed an UNESCO World Heritage Site in 1996.

Cologne cathedral is situated very close to Cologne railway station and is impossible to miss! It is around 25 minutes from Cologne airport by bus or rail.

**If you were to give advice to future SAS (study abroad students) for your country, what would YOU recommend?!? Post in the comments! ** DB